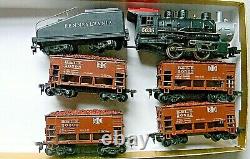 A class II railroad that operates in northwestern Pennsylvania and northeastern Ohio. The railroad's main route runs from the Lake Erie port of Conneaut, Ohio, to the Pittsburgh suburb of Penn Hills, Pennsylvania, a distance of 139 miles (224 km). The original rail ancestor of the B&LE, the Bear Creek Railroad chartered on March 20, 1865 {later changed it's name to Shenango and Allegheny Railroad}, began operation in October 1869. Its promoters envisioned the road as a coal hauler, serving a mine owned by the Mercer Mining & Manufacturing Co. Rail operations were maintained continuously by various corporate descendants on the growing system that ultimately became the B&LE in 1900.

B&LE is operated by CN as their Bessemer Subdivision. As a subsidiary of CN, B&LE has been largely unchanged (though repainting of B&LE locomotives into CN paint with "BLE" sub-lettering began in April 2015) and still does business as B&LE.

B&LE locomotives, especially the former Southern Pacific SD40T-3 "Tunnel Motors", have been scattered across the CN system; many are being used in the line that feeds most of B&LE's traffic, the former Duluth, Missabe, and Iron Range lines in Minnesota. It is then taken down to steel mills in the Pittsburgh region, mainly to the blast furnaces at US Steel's Edgar Thomson Plant in Braddock, Pennsylvania, part of the Mon Valley Works. As of Spring 2021, the active locomotives on the B&LE are CN SD70M-2s 8800, 8804, 8827, and 8876, B&LE 862 (SD38-2), 868(SD38AC), 878 (SD38-2) and B&LE 905 (SD40T-3). In the event you are not, please contact me immediately before leaving feedback so we may resolve it.

Note #3: If not previously stated item(s) come from a smoke-free environment with cats. This is a Grandma & Grandpa shop. For our International customers: YES!! Send us a complete list of all the items you want. Then we will cancel the listings for the items and turn them into a special listing just for you (We'll send you the listing named before making it active).