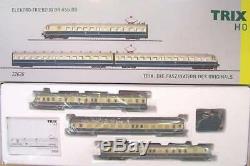 Elektro-Triebzug (Powered Rail Car Train Set), German Federal Railroad (DB) Class 456. The train has a 21-pin digital connector. It also has a 5-pole motor with a skewed armature and a flywheel, centrally mounted, and 4 axles on the middle car powered through cardan shafts. The frame for the middle car is die-cast metal. The headlights are maintenance-free, warm white LEDs, and they will work in conventional operation.

The triple headlights and dual red marker lights change over with the direction of travel. There are close coupler guide mechanisms and electrical connections between the cars. The 66718/66719 interior lighting kits can be installed in the train. I have both of these separately listed, please check out my other items. The train has highly detailed plastic bodies with many separately applied parts such as grab irons, electrical plugs, windshield wipers, antennas, whistles, and horns. The train has interior details in several colors.

There is a detailed representation of the Scharfenberg coupler (non-working) at the ends of the train. Length over the couplers is 919 mm / 36-3/16. Box may have some long-term storage related marks.

Please Contact Me if you have any questions. An Electric "Egghead" or the Country Needs New Minds. The German Federal Railroad urgently needed new electric powered rail cars to manage the increase in passengers during the "Economic Miracle". This was brought about by the standardization of electric operation during the postwar years and the rapid conversion to catenary operation of lines around urban areas. The decision was made to adapt the concept for the first generation of electric postwar powered rail cars from the diesel powered rail cars being developed parallel to these units. The characteristic shape of the ends of the electric trains was almost identical in design to the diesel units, which was colloquially nicknamed in a friendly almost laughing manner as "Egghead", something that railroad crews and personnel did not like so much. An ET 56 consisted of three close-coupled units.

The end cars (Eta and Etb) each had a power truck with 2 powered axles at the outer ends; the middle car (EM) only had regular trucks. While the electric part merely represented a further development of powered rail cars already proven before the war in the urban areas, the car bodies themselves were a completely new development following the principles of lightweight construction.