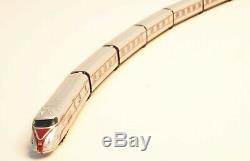 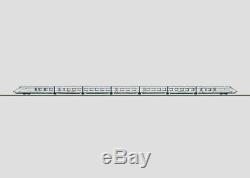 The locomotive has a 5-pole motor. One powered end car has its truck actually powered. The train has LED headlights and marker lights.

There are close couplings with electrical connections between the cars. There are non-working couplers at the ends of the train. Length over the couplers 445mm/ 17-15/16. Livery: Silver Lined with Red.

Notes: There is not any paperwork with this loco. The loco itself is in'As New' condition, having only ever been test run, by me. The box is in excellent condition. I have test run this loco and can confirm that although it was initially reluctant to run, having never been run before, it quickly improved and then ran well.

"Senator" by day and "Komet" by night. At the start of the 1950s, the German Federal Railroad (DB) developed two articulated powered rail car trains for long distance service. Franz Kruckenberg, who had already made a name for himself in the 1930s with fast vehicles, participated in the design.

In the development of the two powered rail car trains, he was able to go back to valuable experiences that had already been made with the Rail Zeppelin and the SVT 135.155: high speed resulting from largely all-aluminium lightweight construction. These two articulated powered rail car trains were presented for the first time at the German Transport Exhibition in Munich in 1952: The VT 10.501, built by Linke-Hoffman-Busch as a daytime train, "Senator, " for the DB, and the VT 10.551, built by Wegmann as the overnight train "Komet" for the German Sleeping Car and Dining Car Company (DSG). In addition to their use and paint scheme, these two trains also had design differences. While the cars for the "Senator" were equipped with single-axle running gear, the "Komet" had Jacobs trucks between the cars.

The end cars on both trains each had a two-axle power truck. MAN diesel motors with originally a performance of 118 kilowatts / 158 horsepower, later with 154 kilowatts / 206 horsepower, were used in the motor cars.

The maximum speed was 120 kmph / 75mph; a planned increase to 160kmph / 100mph was not carried out. The power transmission was done hydraulically by means of a four speed transmission. The "Senator" offered its passengers 135 seats in 1st class, 24 of them reclining seats. The trains went into regular service with the beginning of the summer schedule in 1954.

The daytime train, road number VT 10.501, as Ft 41/42 "Senator" on the route Frankfurt/Main - Hamburg, the overnight train, road number VT 10.551, as Ft 49/50 "Komet" between Hamburg and Basle (starting in the summer of 1955 to Zurich). The running characteristics of the overnight train received a positive evaluation. " The "Senator was in use until June of 1956, was rebuilt several times and tested in experimental runs. In 1959, it was taken out of operation and in 1962 was scrapped. All of the cars from the two trainsw ere scrapped except for the intermediate car VT 10.551i from the overnight train that is used by Nurnberg railroad enthusiasts as a home for their club. The experiences with the two Kruckenberg designs fed the development of the subsequent DB VT 11.5 TEE powered rail car train. Please Contact Me if you have any questions. The item "NEW MARKLIN 88100 Z GAUGE SENATOR EXPRESS POWERED RAIL CAR DAY TRAIN VT10.501 DB" is in sale since Friday, April 12, 2019. This item is in the category "Collectables\Model Railways & Trains\Z Gauge\Locomotives".