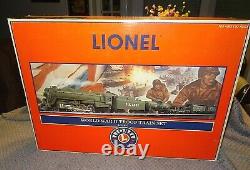 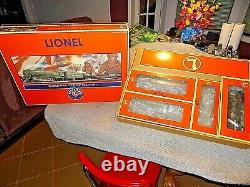 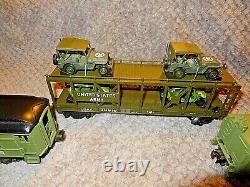 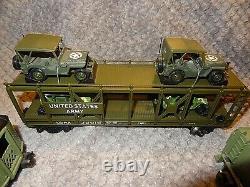 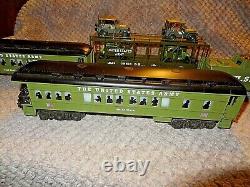 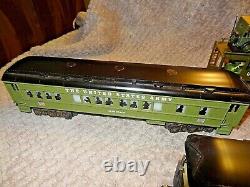 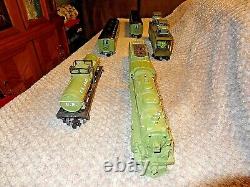 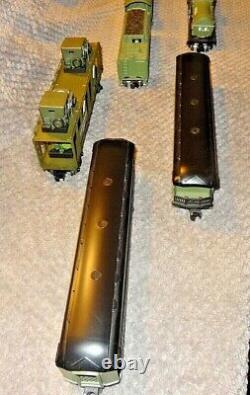 Up for SALE Lionel WWII Troop Train Set #6-21951 with custom upgrade. It was a time in which the world teetered on the brink of destruction. The men and women who served in World War II stared pure evil in the face and did not flinch. Beyond their own bravery and teamwork on the front lines were countless support efforts being carried out within the United States to get them what they needed. Trains played a vital role. Between Pearl Harbor and V-J Day, Americas Railroads operated 113,891 special troop trains, moving 43,700,000 members of the armed services. This was an average of almost a million troops a month. Lionel pays honor to our Veterans, our Railroads and the spirit that the world witnessed during World War II with our own version of a WWII Troop Train. Led by an all-new, die-cast steam locomotive, this set captures the essence of WWII.

Decorated in Army green, the set features a tank car filled with fuel, Upgraded to a MTH Double Decker Flatcar with 4 die-cast Army jeeps, and two passenger cars, adorned with the names of Americas landing sites in Normandy, Utah Beach and Omaha Beach. This set is sure to be a treasure to veterans, WWII history buffs and anyone who appreciates the sacrifice and hard work that went into this cataclysmic struggle.

The original Lionel Single Jeep Flat-Bed Car, has been Upgraded , with a MTH Double Decker Flat-Flat Bed Car. The cause was due to the Lionel Single jeep carrier Flat Bed was defective and cracked from the Lionel. The MTH Double Decker Flat-Bed Car is a better fit and better looking Flat -Bed Jeep carrier then the single original Lionel Car refer to Photo # 6 - # 8 Note: The set is Like New From my private stock of rare trains , Note under E BAY rules. I have to say used, but is new , The set was only removed and one car replaced and upgraded from its factory box and train boxes, to test run for operability before listing.

The seller is "1benxt5" and is located in Yonkers, New York. This item can be shipped to United States.