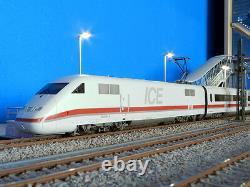 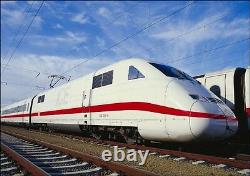 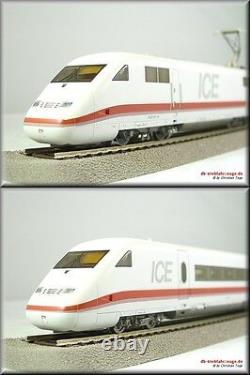 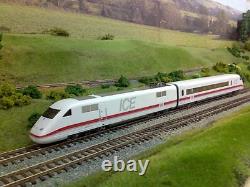 We guarantee a rapid, problem-free and above all correct completion. Trustdeal-for-you has accumulated thousands of POSITIVE feedbacks. We have achieved this through HONESTY , DILIGENCE , and FAIRNESS.

We assure everyone of the personal attention you deserve and the satisfaction you expect. We are gladly to help and support you if you need assistance. Fleischmann High Speed express train "ICE 2" of the DB AG.

ICE 2 Triebkopf und Steuerwagen. HO-scale DC 2-rail with 6 pin DCC interface. The Deutsche Bundesbahn started a series of trials in 1985 using the InterCityExperimental (also called ICE-V) test train. The IC Experimental was used as a showcase train and for high-speed trials, setting a new world speed record at 406.9 km/h (253 mph) on 1 May 1988.

The train was retired in 1996 and replaced with a new trial unit, called the ICE S. After extensive discussion between the Bundesbahn and the Ministry of Transport regarding onboard equipment, length and width of the train and the number of trainsets required, a first batch of 41 units was ordered in 1988. The order was extended to 60 units in 1990, with German reunification in mind.

However, not all trains could be delivered in time. The ICE network was officially inaugurated on 29 May 1991 with several vehicles converging on the newly built station Kassel-Wilhelmshöhe from different directions. The first ICE trains were the trainsets of ICE 1 (power cars: Class 401), which came into service in 1989. The first regularly scheduled ICE trains ran from 2 June 1991 from Hamburg-Altona via Hamburg Hbf - Hannover Hbf - Kassel-Wilhelmshöhe - Fulda - Frankfurt Hbf - Mannheim Hbf and Stuttgart Hbf toward München Hbf on the new ICE line 6.

The Hanover-Würzburg line and the Mannheim-Stuttgart line, which had both opened the same year, were hence integrated into the ICE network from the very beginning. From 1997, the successor, the ICE 2 trains pulled by Class 402 powerheads, was put into service.

One of the goals of the ICE 2 was to improve load balancing by building smaller train units which could be coupled or detached as needed. The ICE 1 and ICE 2 trains' loading gauge exceeds that recommended by the international railway organisation UIC. Even though the trains were originally to be used only domestically, some units are licensed to run in Switzerland and Austria. Some ICE 1 units have been equipped with an additional smaller pantograph to be able to run on the different Swiss overhead wire geometry. All ICE 1 and ICE 2 trains are single-voltage 15 kV AC, which restricts their radius of operation largely to the German-speaking countries of Europe.

A notable characteristic of the ICE trains is their colour design, which has been registered by the DB as an aesthetic model and hence is protected as intellectual property. The trains are painted in Pale Grey (RAL 7035) with a Traffic Red (RAL 3020) stripe on the lower part of the vehicle.

The continuous black band of windows and their oval door windows differentiate the ICEs from any other DB train. The ICE 1 and ICE 2 units originally had an Orient Red (RAL 3031) stripe, accompanied by a Pastel Violet stripe below (RAL 4009, 26 cm wide). These stripes were repainted with the current Traffic Red between 1998 and 2000, when all ICE units were being checked and repainted in anticipation of the EXPO 2000. The "ICE" lettering uses the colour Agate Grey (RAL 7038), the frame is painted in Quartz Grey (RAL 7039). The plastic platings in the interior all utilise the Pale Grey (RAL 7035) colour tone.

Originally, the ICE 1 interior was designed in pastel tones with an emphasis on mint, following the DB colour scheme of the day. The ICE 1 trains were refurbished in the mid-2000s, however, and now follow the same design as the ICE 3, which makes heavy usage of indirect lighting and wooden furnishings.

The distinctive ICE design was developed by a team of designers around Alexander Neumeister in the early 1980s and first used on the InterCityExperimental (ICE V). The team around Neumeister then designed the ICE 1, ICE 2, and ICE 3/T/TD.

The interior of the trains was designed by Jens Peters working for BPR-Design in Stuttgart. Among others, he was responsible for the heightened roof in the restaurant car and the special lighting. The same team also developed the design for the now discontinued InterRegio trains in the mid-1980s. Fleischmann HO ICE2 features very smooth and powerful running on rail. Comes with directional front light and rear red light.

Brand new in the original box. Are you ready to ride? This item is in the category "Toys & Hobbies\Model Railroads & Trains\Railroads & Trains\Locomotives". The seller is "trustdeal-for-you" and is located in this country: HK. This item can be shipped worldwide.