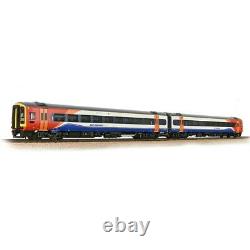 The British Rail Class 158 Express Sprinter is a diesel multiple-unit (DMU), built specifically for British Rail's Provincial Services sector between 1989 and 1992 by British Rail Engineering Limited (BREL) at Derby Litchurch Lane Works and outshopped in Regional Railways Provincial blue. They were built to replace many locomotive-hauled passenger trains, thereby reducing cost of operation, and to allow cascading of existing Sprinter units to replace elderly'heritage' DMUs. The majority of the 182 158 units were built as 2-car units, with 17 3-car units constructed specifically for use on Trans-Pennine services. Similar 3-car units were built for use by Network SouthEast but these were converted to Class 159 specification before introduction to service, with toilet retention tanks and other modifications to operate over the third-rail network All the Class 158s remain in service today, with operators including ScotRail, Northern, Great Western (GWR), East Midlands Trains (now EMR), and Transport for Wales (formerly Arriva). Former operators include Central Trains. The Class has worked extensively across the UK network, even into East Anglia as far as Stansted Airport and Norwich. The item "Bachmann 31-518 Class 158 2 Car DMU 158773 East Midlands Trains" is in sale since Thursday, December 17, 2020.

This item is in the category "Collectables\Model Railways & Trains\OO Gauge\Locomotives". The seller is "cheltenhammodels" and is located in Cheltenham. This item can be shipped worldwide.